Terracotta and ceramics as origins. A master as the progenitor. These two of the major motifs hovering among the rooms of the sumptuous and seductive Palazzo Vizzani in Bologna, headquarters of the Alchelmilla Association (to whose activities Juliet has already dedicated some articles[1]). The exhibition Mutaforma. Ceramic mutations of the CZ code, curated by the NN Collective, in the context of the program of initiatives promoted by the Carlo Zauli Museum in Faenza, takes place in this building until 30 October 2022. In this way, the relations between this center of international importance in terms of terracotta and ceramics and the Alchemilla association itself find a significant occasion, as both of them are united by the promotion of residences for young artists assisted by critics and experts.

The master in whose name this meeting takes place is therefore that of the great painter and ceramist Carlo Zauli (1926-2002) on the twentieth anniversary of his death. A celebration in which not only terracotta and ceramics are exalted as anthropologically primitive techniques, but also Carlo Zauli himself as the inventor of a “code” or as an eminent figure in the use of these techniques: a figure so relevant as to leave recognizable traces in works by later authors, who also tried a similar technique. The exhibition presents a significant sample (forty-two in all) among which the names of Salvatore Arancio, Pierpaolo Campanini, David Casini, T-Yong Chung, Giulia Dal Monte & Isabela Benavides, Alberto Garutti, Eva Marisaldi, Mathieu Mercier, Jonathan Monk, Ornaghi & Prestinari, Italo Zuffi, Sisley Xhafa, Shafei Xia, Sissi stand out.

To frame everything in the presentation of the exhibition, the concept of metamorphosis is evoked: “here understood as the principle of life and relationship that crosses and binds every living form into an organic whole”. This concept was once evoked by Carlo Zauli himself in the title of his work Flessuosità: metamorfosi di un primario (1975), to which the exhibition assigns a central position. It is a fascinating and precisely supple configuration as informal as it is poetically material, made of a silver-gray ceramic with reddish hues, that blooms and drips from an angle which is almost hidden at the heart of the whole. It is around this artefact and others by the master (including Vaso from 1953, Geometrico from 1973-4, Arata from 1973 and Piatto materico from 1980) that the works of the other authors are arranged in various rooms.

The challenge obviously lies in stimulating the viewer to verify in what way and extent the echoes of Carlo Zauli’s work resonate in the contemporary artistic experience. A bet that can certainly be said to be largely successful, such as to enhance the stature of the master and at the same time confirm that his work perfectly functions as an antecedent to the present art of terracotta and ceramics. A present that the forty-two works make to be extremely varied and heterogeneous, but where a more or less latent or manifest, direct or indirect harmony with the “CZ code” remains recognizable.

A few examples? Difficult to make a necessarily narrow selection, without fear of unfairly penalizing the neglected. Taking the risk, we will cite the Big Bean (2004) by Mathieu Mercier, made of a glossy and blunt whiteness that invites you to sit, albeit fleeting and unstable; Sissi‘s Servizio Osseo from 2016, which suggests a dazzling yet sinister and impossible to meet for dinner; the dark trunk, uprooted and resting on a glittering support (Untitled, 2005) by David Casini. We then mention Polpa e nocciolo (2006) by Sergia Avveduti, where the medieval chess shapes that allow a wooden soul to be glimpsed are reproduced and enlarged, the Tigre Barca by Shafei Xia (2020), with the inevitable boobs with red nipples (or ice cream with icing?) transported on the back of the animal-boat and finally Madonna by Alberto Garutti from 2008, completely similar to the more usual ones, Lourdes model, except for the fact (attention!) that it is different to the touch, because it is warm, that is heated.

Less convincing, at least in their provocatively ironic intentions, seem to be Prove di volo (2017) by Ornaghi & Prestinari, where two terracotta pots are wrapped in two cushions to prevent breakage in the event of flight or Toothpick ( 2006) by Sislej Xhafa, in which a toothpick in glossy white ceramic under a glass case intends to celebrate the wooden one that has always been held in the mouth of the author’s grandfather, as well as Claymation (Black) by Jonathan Monk, a simple black life-size dustbin . 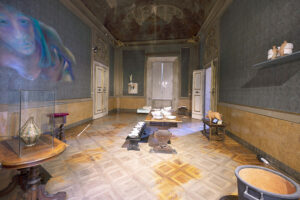 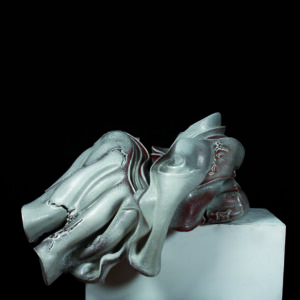 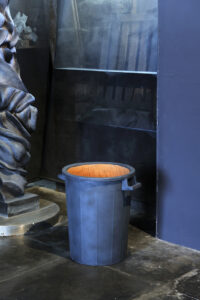