Nicola Alessandrini and Lisa Gelli, a couple of street artists and illustrators from the countryside around Macerata who share a profound affinity of ethical vision that declines in different styles, get involved without hesitation in the double exhibition at Portanova 12 gallery in Bologna, which borrows the title from the text of a caustic cartoon by maicol&mirco. The theme of offspring (individual, epochal, cultural and species) is the atavistic leitmotiv that fosters the need for both to immerse themselves in the removal of their home community, understood both as a family and as a social horizon. A sinister profile emerges, in which a crude, petty and quarrelsome reality is discovered where each character appears as an entity consumed by senseless grudges and by a burning selfishness, with some gashes of animalistic hope that something can change.

The exhibition opens with a monumental mural painting made by the two artists in the anteroom of the exhibition hall, which seems to rewrite Goya’s devouring Saturn, a dull monster from the most archaic Greek cosmogony that did not hesitate to engulf his children when he was prophesied that one of them would supplant him and deprive him of power. The monkey-Saturn is here the archetype of the primacy of humanity, it is an identity that has yet to evolve and that therefore still has the space and the possibility to shape the destiny of its lineage, but it is also the sleep madness of a brutalized province which denies a centuries-old tradition of rural humanism with coercive impulses of aggregation in the name of a sterile defense of customs. Finally, “monkey” is a racist insult, emblematic of a world continually torn by borders and trenches, the fuse that triggers the fire and makes the irreparable happen.

This is the society of the children of the children of the children, going backwards in the form of which it is possible to draw on the primeval inhumanity again: Nicola Alessandrini accomplishes this in his pressing pictorial reinterpretation of the image of a monkey face downloaded from the net. A restless amalgamation of instinctive brushstrokes operates the continuous cancellation and reconstruction of a residual identity always available for new modeling. Jester, monster, victim, mask, cartoon, the original monkey succumbs to an intimate need for painting like a restless teenager declaring war on his distracted and confused parents.

On the opposite wall, another obsession, the series of baptismal robes that Lisa Gelli repeats with different decorative patterns taken from Rakam, a magazine of women’s works that since 1929 dispensed readers with authoritative indications on the role and behavior of women. The precision of the design, an ambiguous exercise of patience and rebellion, seems to sharpen the hatred for conformism and hypocrisy that over time have saturated the gender discourse. And the future could be even worse than the past, as Margaret Atwood’s The Handmaid’s Tale (1985) predicted, a novel set in a totalitarian theocracy in which the female reproductive functions were completely enslaved to the purposes of politics. This dystopian hypothesis inspires Lisa with a series of room-paintings in which space becomes a liquid and rosy body to live in, a sensitive catalog of shortcomings and incompleteness that magnify in the melancholy solitude of a visionary gestation.

In the meantime, in another more coldly dreamlike room, Lisa’s grandmother drawn by Nicola, wearing the most iconic of her floral dresses that extends into an ultra-cult sect hood that hides her face, fights the bogeymen of her unconscious which is prey of a rampant irrationality. The consolidated appearances of the house turn out to be nightmares, mocking monkeys instigate hatred while the mask blinds the conscience and removes responsibilities. And just when grudges, guilt and violence seem to have irreversibly distorted the course of existence, the large iridescent rural landscape that ideally concludes the exhibition identifies a weak hypothesis of cathartic aurora in a common ground of coexistence for wolves, men, shadows and monkeys in which the demons of the two artists try to recompose themselves.

Nicola Alessandrini and Lisa Gelli. I figli degli altri (The children of others)
18 January – 22 February 2020
Portanova 12
Via Portanova 12 Bologna 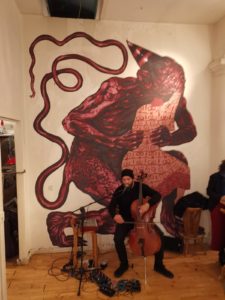 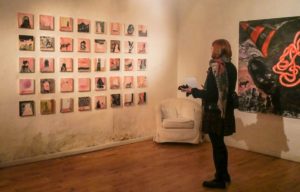 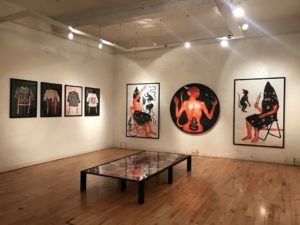 For all the images: Nicola Alessandrini and Lisa Gelli. I figli degli altri. Installation view at Portanova 12, Bologna 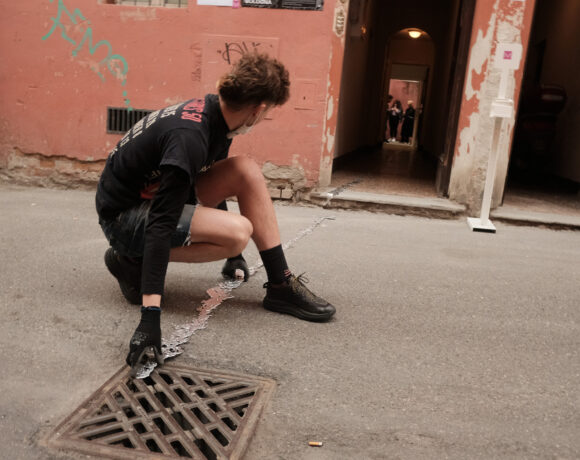 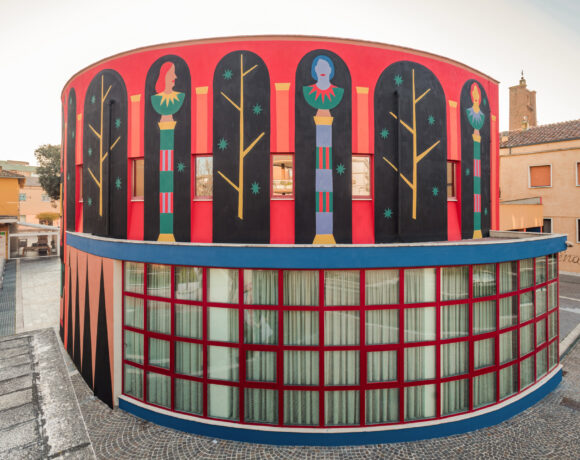