The truth told by Teresa Margo..

OTHER IDENTITY | The “lockdown” goes p...

OTHER IDENTITY | The “lockdown” goes public

The third edition of the collective exhibition “OTHER IDENTITY” Altre forme di identità culturali e pubbliche was inaugurated on 18 March in Genoa, at the Guidi&Schoen­­ – Arte Contemporanea Gallery and at PRIMO PIANO di Palazzo Grillo, an international event of contemporary art by Francesco Arena. The project becomes more and more consolidated in each edition and also this year we find ourselves in front of many unpublished Italian and foreign artists for the city (forty-four, to be exact), who interact with each other through different media: photographs, installations, new media art and video-art.

Other Identity, as the curator himself says, continues to decipher a now widespread phenomenon that has radically changed the way we “live” and “interpret” our image, constantly exhibited and advertised; our way of self-portraying and presenting ourselves to the world: the spectacularization of a private person who transforms himself into public through social media, creating new forms of identity in continuous transformation. The show includes both established artists and artists in their first exhibition experience, and this is also the strength of this project: being able to give the user a complete reading of what contemporary art is today. The two locations welcome this project in an intimate and almost “private” way, which reflects exactly the period we are experiencing and the discomfort caused by many lockdowns: the works are smaller than in past editions, but symbolically and conceptually have a stronger sense of self, because isolation has made everything more focused on one’s being.

At the Guidi&Schoen Gallery, even before entering, we see through the window the first works and we find ourselves catapulted into the inner and secret world of many artists. In the upper part of the gallery, between the white walls, we find the energetic work by Valentina Neri, six photographs, called Almanacco Toilet Club, which tell a story with strong tones and also very intimate elements, the world of Drag Queen; the diary in thirty works by V.Silente/Valentina Rinaldi, which also tell in a fragmented way her way of being a woman; the ceramics on trays by Cristina Mirandola, Pegni d’amore, portraits of struggle and dance; the black and white ones with perfect balance by Alessia Cortese; the game of mirrors by Ivana Galli; the six small works by Anne Locquen in faded tones, a story between oneself and the relationship with others; the eight polaroids by Corrado Dalcò from the Breathe project, which tell the uniqueness of the experiences of young women in the journey that leads to acceptance of the body and sexual awakening, offering the viewer a glimpse into the life of those girls who are currently reaching the awareness of their eroticism.

Between the first and second rooms, the videos on the monitor by Ivana Galli and Cristina Mirandola conceptually reinforce the wall works, together with the video Legati e legami by Madeleine Flèau and the short films ICEBERG and Ludovico Tersigni for Gucci by Manuel Scrima, where the identity is told in a completely current way, linked to big names or well-known names in the world of entertainment. In the video compilation we also recognize the official trailer of the exhibition edited by Dagmar Thomann on the music composed by Luca Fucci. In the following room, the triptych Le fantôme and the installation Mea Culpa by Madeleine Flèau project us into a suspended world with strong ties to memory, together with the small pink-toned photographs by Beatrix Kittens; the photographic installation by Laura Petra Simone, with a strong bond with her body and nature; and Valentina Violo‘s polaroids, a collection of self-portraits taken mostly in hotel rooms, almost always at night.

The gallery, on several floors, showcases exactly the story of the different artists on display, and actually, descending between the gray and intimate walls we find the intimate work by Marco Pietracupa. The project entitled Io e Lui tells of a profound situation that struck him, the loss of his father. Marco Pietracupa declares: “I really waited until I was the same age as him when he died to take this photograph. Photography also has a cathartic power. I wanted to close a circle. It was the right time to stop and immortalize the emotions of all these years in photography. I gave myself the identity of my father. I chose to wear the elements that for me characterized him the most: his uniform, his glasses, his hairstyle. They are the most characterizing elements, but also the least intimate, around which I then built the enveloping experience of the union between death, love and pain. My mother and my sister who wrap this figure show the pain we felt, the emptiness offered by my mother’s naked body, the leaning posture of my sister, the clothes of a father, of which only the shape of the uniform remains, I that I took his place among them. Nothing is left to chance: the place I have chosen is the bedroom, where he has gone. The shot was taken by my son, who was the same age I was when the fact happened. In this photo we find the elements that characterize my photographic research: the use of direct, overexposed, artificial light; the nude to represent the essence and purity of the person, the dress to tell the contrast between fiction and truth. Clothes can give you character, but the essence is elsewhere”. The curator Francesco Arena feels this work deeply because he too, having suffered a loss, dedicated the exhibition to his mother Luciana Briasco Arena, one year after her death.

Then we find three photographs entitled The Nest by Serena Biagini, the black and white collages with dreamy subjects by Cirkus Vogler, the works by the French artist Clara Diebler with feminine elements and a strong bond with her alter ego, and the project entitled Magdala composed of twenty-five works by Chiara Tommasi, where the photographed subjects have a strong link with the aesthetic sense of the twentieth century. In a part of the gallery below we find four photographs printed on anodized aluminum entitled Sebastiano by Manuel Scrima, which tell of the martyrdom of Saint Sebastian; the artist merges Christian iconography and classical statuary in a single experience.

Entering PRIMO PIANO di Palazzo Grillo we find in front of us the poster with the image of the tongue of Gaia Benedetti Perinetti Casoni, which attracts us and invites us to enter even almost with insolence. To immediately contrast this incisive cut we find the first artist on display, Chiara Vitellozzi, with the project How to disappear completely, a work on the memory and the expectation of returns.

In the second room to follow we discover the fifteen Polaroids with faded tones and subjects by Benedetta Cari; the three spray portraits on advertising photography by Marco Rèa; the eight photographs from the Marezzo project by Gaia Benedetti Perinetti Casoni, where the concepts of liberation, recognition, creativity and rebirth are the basis of her work; Matteo Bosi and his tableau vivants enrich the room with strong and contrasting colors. Finally, a monitor that plays the videos of Elleree Fletcher (Bombshell_Bot), an American artist who works with videoperformance on the TikTok platform, whose pseudonym Bombshell_bot is an avatar that questions hyperfeminility and self-objectification; the innovative, visceral and explosive work of the Spaniard Javier Gallego Escutia; and the videos entitled Autoritratti by Luca Bortolato and Safety Mask by Domenica Melillo.

In the third room the works of Dana De Luca, Tung Li, Ye She-Yu, Ida Marinella Rigo, Angelica Intini interact with each other in an intimate and inquisitive way. In the fourth room, however, the works of Damiana Cicco, Sami Oliver Nakari, Laura Greco, Bianca Boriassi are linked by elements such as fashion, introspection and exhibitionism; in this fourth room there are also the videos Ultima Madre and Innerspace / Outerspace of the artist and director Federica Intelisano and the two videos of the well-known Betty Bee, where the artist plays between fiction and reality, dressing all the works of she.

In the fifth room the photographs of Luca Matarazzo, Alessandra Scoppetta and Stefania Cerea contrast the painted roof of the frescoed vaults. The works are also united by two components: color and light.

In the last room the exhibition is closed by the works of Erika Zolli, Maria Palmieri, Cristina Malcisi and Ray Bahnoff; the latter installed about thirty photographic pieces (with hand-made interventions) and with soundtracks entitled Viaggio in Italia, in a certainly particular position of the room, that is, in the entire area of ​​the frescoed fireplace; in his work famous and lesser-known characters get confused, thus inviting the viewer to ask himself: “But do I know this one here?”.

The project is accompanied by two video projections, one for each gallery, to tell through video catalogs all that has been done in the past editions, 2016 and 2019, because Other Identity is not only a story that is an end in itself, but it is also an interior work made of evolutionary processes that must be elaborated and understood over time. 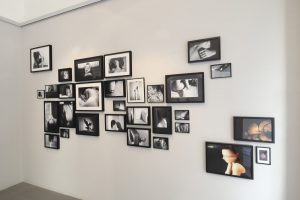 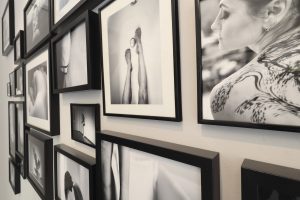 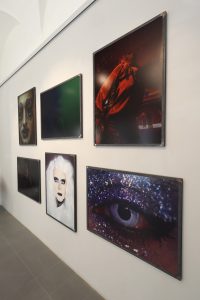 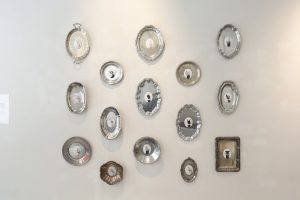 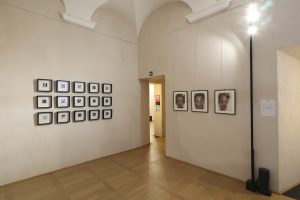 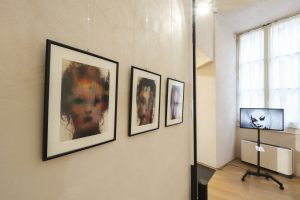 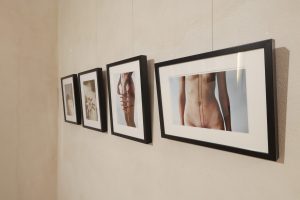 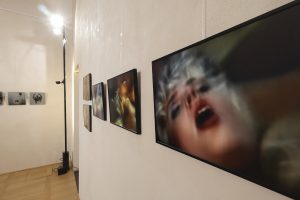