Socialist realism, that developed in the third decade of the 20th century, embodied the official art of the Soviet Union and the socialist countries of Eastern Europe until the collapse of communism. This literary and artistic stream reflected the ideals of interdependence between practical and theoretical activity elaborated by Marx and Engels, who postulated an art faithful to social reality, developed from tangible values ​​and not from abstract ideals and capable, in turn, of creating concrete values. The main function of art was to celebrate socialist progress through recurring themes such as the class struggle, the alliance between peasants and workers, the history of the labor movement, the daily life of workers. Although Marx and Engels did not intend to reduce art to a pure tool of propaganda and controversy, these objectives have in fact oriented teaching in the Academies of Fine Arts for decades towards rigorous technical training and very rigid figurative and ideological standards. The consequences are still burning in the poetry of many contemporary artists originating in the geographical areas historically affected by the Communist Revolution, just think of the monographic project Subversion to Red of the Macedonian artist Nada Prlja presented at the 2019 Venice Art Biennale, a subversive return to the “forgotten” notions of idealism and ideology through the critical rereading of the postulates of Marxist theory and leftist thought.

This introduction frames the cultural background of the Macedonian Sinisha Kashawelski (1969, lives and works in Kumanovo), whose paintings combine Macedonian pictorial tradition and cultured quotes from the history of art with a perturbing surrealist style. In his paintings, made in oil on canvas (but occasionally on wooden boards such as the ancient icons of his native country), different styles and suggestions blend in intriguing dreamlike visions that look at art consecrated by history with extreme freedom. His recurring subjects are solitary human figures, most of which females, placed almost like mannequins in the midst of other elements that are part of the painter’s studio furnishings and which are recomposed in essential object theaters. The compositional structure of the paintings, characterized by tall and narrow formats and from a slightly lowered point of view, recalls the great religious paintings of the late Renaissance, when the niches of the polyptychs placed on the altars were inhabited by three-dimensional saints and blessed realistically, despite the overall symbolic idealization of the image. Even the characters of Sinisha Kashawelski stand in a hieratic frontal position like enigmatic idols stuck inside space of geometric sharpness, made incongruent by the recurring “vanishing” of the figures at the base as if the color melted or became fog, revealing illusory nature of the image.

The figures are characterized by the solemn gestures of sacred or regime painting and by peculiar object-attributes that once again recall the escamotages of figurative hagiography, in which the lives of the saints were synthesized by the objects that functioned as vehicles of their miracles and by martyrdom tools. In this case, the attributes are weapons (or things that are harmless as such), communist symbols (represented as objects or mimicked by the characters’ gestures), books and propaganda slogans, but also absurd elements taken from reality according to refined Magritian nonsense. This is a Picturesque cultural operation, in which these granite symbols of ideological power and strength crumble before our eyes becoming mere empty presences, almost toys that stage the story in the form of a puzzle, with the intent to unlock its true meaning.

The bright and crystalline light that plastically defines the characters and their objects in clear atmospheric tonalism triggers a suggestion of airiness. Still, there is nothing naturalistic about it, and everything lives in a purely mental dimension. The complex game of interrelations between symbolic elements, hyper-realistic punctiliousness, and lucid hallucinations, combined with the refined aesthetic irony, suggests that painting for Sinisha Kashawelski is also a staging of the very problem of the integrity of the plastic values of painting, conducted with an approach always in the balance between hedonistic and propagandistic vision. This research, which becomes a disturbing metaphor for the deceptive manifestations of history, leads him to create his pictorial idols with maniacal attention to detail, charged with symbolic intentions, whose reliability is, however, immediately contradicted by the aporias of the combinations between the various elements. The strange contamination between idealism, rationalism, and surrealism that results from it, arises in him as a reaction to a historical legacy he distrusts, but which he painfully feels like an indispensable part of himself.

In these enigmatic atmospheres, which arouse in the observer a feeling of waiting for who knows what development or an always denied ideological revelation, the artist’s fascination for the monodic theme of the idealized female portrait engages, an iconography that marks his style making it unmistakable. The maliciously angelic faces of his heroines express an intriguing sensuality in brazen contrast with the poses and attitudes that wink to those of the Madonnas and saints in the art history reinterpreted through the filter of socialist realism as ordinary people and workers. The exhausting beauty of these women, who Salvador Dali would have liked for their “dazzled and hallucinated by wax” quality, has fallen into a pseudo-mystical reverie capable of reinventing an entire formal tradition in terms of a hollow mystery, but at the same time to demystify the ideological significance of this cultural critique operation to a triumph of eroticism and desecrating irony. 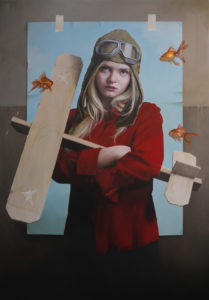 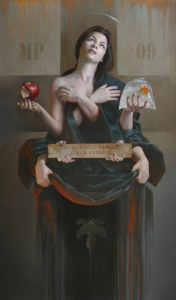