Erika Lacava: The exhibition “A casa mia avevo tre sedie” (“At my house I had three chairs”) is currently on show at EXMA, curated by Simona Campus, and reconstructs the rooms of the house that belonged to your great-aunt and nanny Maddalena. The Studio Visit column started from a similar case, that of Lucas Samaras who in 1964 reconstructed his workspace (and his life’s one) in a gallery. I liked this particular coincidence … How did the idea of ​​the exhibition at EXMA come about?
Maria Jole Serreli: The idea was born from the art historian Simona Campus, artistic director of the EXMA municipal art center of Cagliari, as an exhibition to restart after Covid. With her words: “We choose to start again from the idea of ​​home, no longer or not just a place of confinement – as it has been in the past few months – but as a field of forces in which our truest identity is built”.

How long has Marrubiu’s home become your studio?
I received the house in Marrubiu as a gift six years ago from my great aunt Maddalena, who lived there with my other great-aunt, Gesuina. Before them, my great-grandmother lived there and I grew up in those walls between homemade bread, life stories, lace and hand-sewn clothes. After the death of my nanny Maddalena at ninety, for about a year I was unable to go there until, on the advice of my teacher Pinuccio Sciola, I decided to make my study of it. But the nostalgia remained strong, the physical lack of my loved ones, and above all I had a strong respect for their things that I could not throw away. Then Luca Beatrice’s words that I listened in a seminar many years earlier in Lucca came to my mind: the true artist is able to use what he has available, and in this process the ability to recycle and distort a common object is fundamental. From that moment I became a storyteller for the need not to forget the past, whether they are lived moments or simple stories. Almost without realizing it, the memoirs project that I entitled “Animas” was born.

How have the materials already present in the house interacted with your works?
Slowly I emptied the rooms of Marrubiu’s house, discovering an infinite microworld that I didn’t know. I discovered fabrics and spools of thread from the early 1930s, magazines, photographs, cutlery and home accessories but also a collection of clothes, shoes and bags that recounted the years lived through the change of fashion. I stripped these rooms of the objects that lived there, and I used them by transfiguring them, giving them new life. Then with these creations I covered the rooms, relocating the objects now transfigured in their original place. What appeared to be common objects without meaning now have become protagonists of the spaces that kept them. It took 5 years.

How has the relationship with your work changed compared to before?
Before owning the house, I didn’t spend much time on my island. My artistic commitments led me to travel a lot and when I returned to Sardinia I worked mainly in a small studio in Terralba, where I live, and there I isolated myself a lot. Owning an entire house as a studio gave me the opportunity to experience everything, especially studying people. I did nothing but tell the life of the people who lived in the house through their objects. I didn’t throw anything away, even a small piece of fabric was important to me. I was no longer free in creation: the house took over everything I decided to do and I created for it.

How does the distance of your studio from home affect your work time?
I dedicate many hours to my work, often even at night. My home is about 10 minutes from the studio and, although it may seem little, I live this distance in an annoying way. This is why I anticipate that I have decided to move permanently to the studio from next year. Shortening distances means not wasting precious time and being in that house makes me feel good, it makes me happy.

During the lockdown did you have the opportunity to attend your studio or did you stay away from it, and in this case, what consequences did this new modality have on your work?
Unfortunately I was unable to live the studio during the lockdown period but the distance allowed me to devote myself to the new ceramic project that I have been carrying on for some time. Fortunately in my home I have a ceramic oven and a small laboratory that allowed me to develop the “#iorestoacasa” project: I made many small houses on small planets paying homage to the tale of the Little Prince, and then giving them to anyone would like to welcome them.

Another key moment in your artistic career have been the trips to China in the past three years, first in Shenzhen in the Eachway Century Fashion Museum of the designer Huizhou Zhao with an exhibition curated by Barbara Santoni and then in Chongqing as part of the project government “One Belt One Road” as a guest of the International Ceramics Forum, in collaboration with the MA-EC gallery in Milan. How is your current job heir to the Chinese experience?
My work experiences in China have given me various gratifications, not just artistic ones. On the last trip in 2019 to Chongqing (an unimaginable megalopolis) they offered me the opportunity to stay for a long period in the historic ceramic district of Rong Chang where I will have a house and a ceramic laboratory available to deepen the techniques of execution with the clay of the territory. The new project now previewed at EXMA was born from the meeting with China. It is a combination of ceramic and local Ramié fabric, which then evolved concretely in the conceptual project that combines my culture with the Chinese one. Waiting to return to China, I continue to carry out the rest of the project which will be exhibited in the museum spaces of Rong Chang in the near future, in collaboration with the MA-EC gallery.

BIOGRAPHICAL NOTES: Maria Jole Serreli is a painter, sculptor, fiber artist and performer. Born in Rome in 1975, she lives and works in Marrubiu (OR). Her first solo exhibition dates back to 1999. In 2010 she won a scholarship for an artistic residence in San Sperate, at the International Sculpture School: here she met Pinuccio Sciola, whose memory and teaching she remains deeply attached to. She has taken part in numerous exhibitions in authoritative locations in Italy and abroad, including the University of Pisa, the Macro Testaccio in Rome, the Art Moore House in London. At EXMA in Cagliari she has already been present with a work in the collective exhibition “Breads and Mothers, the generating force of art”, in 2015. In that same year she was a guest of the Artistic Residence Cosenza 2015 and founded in Marrubiu “The Art House Space”, the home-atelier project to which the current exhibition is dedicated. Since 2019, with MA-EC Art Gallery Milan, she has been engaged in a cultural exchange with China and since the same year she has also been represented by the Mancaspazio gallery in Nuoro. 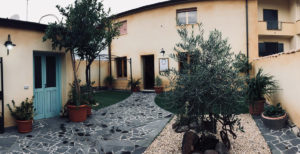 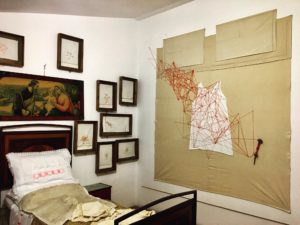 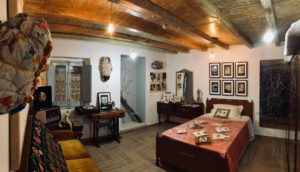 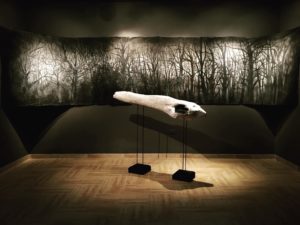 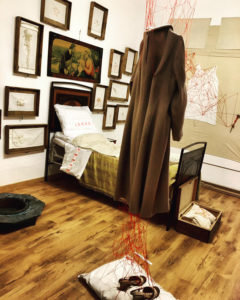