All about Nelumbo Open Project..

The use of writing words as an alternative to drawing and painting considered in a traditional sense, is a recurring trend in contemporary art that has been revived today. Several exhibitions, which have been held since the 1920s, have explored various aspects of a polyphonic collection of artworks, which reflect the long-standing human’s desire to benefit from imaginative and creative resources of signs to achieve beyond the notion. Mallarmé’s poem known as Dicing (Coup de dés), Apollinaire’s Calligrams, free placement of words in the style of Futurism, Raoul Hausmann’s phonemes, Kurt Schweitters’ musical work entitled Ursonate, Irma Blank’s visual calligrams, Hildegard von Bingen’s glossolalia, Chiara Fumai’s subconscious designs, and Bruno Monari’s illegible texts are connected by an invisible string. What these experiments have in common is that they all use language, drama, and performance to communicate and overcome obstacles, to circumvent the common communicative function of language and to investigate the sphere of the illegible and the unspeakable. Calligram goes beyond communication and turns into a trace of existence and a tool for self-expression, and in this way, it freely uses the generating and imaginative sources of symbol-role.

Going beyond the semantic dimension of language means releasing a kind of energy that activates the movement of the hand while writing, to encourage the observer to find out the writer’s mental state, physical movement, psychological motivation, and neural response through the final trace of the pen stroke. In this instinctive process, something happens, that Barthes defines as beyond the alphabet-centered individual ethnic prejudice in his treatise, “Variations on Writing, 1994”. He discusses the stubborn belief that “the rules of writing are secondary compared with the rules of the dialect that is the language.” In these pages, Barthes reveals his attitude about writing: he defines the self-sufficiency of meaning as corresponding to the insistence on materialism in the relationship between the writing and the body, because “it is the hands and eyes that guide writing, not logic and language.” Proclaiming the unconsciousness of primitive human signs, symbols and calligrams pave the way for the infinite complexity of art, in which the tortuous path of symbols in Western culture becomes a metaphor for the complicated structure of the world.

Artworks of Paola Santagostino, a psychoanalyst specialized Psychosomatic Medicine, also fully addresses these considerations. In recent years, she has decided to combine her profession with art. Her most recent works, belonging to the series entitled Psychoanalytic Session (2019), are born as a pictorial transcription of the therapeutic sessions with her patients. Symbols, connections, and patterns that emerge during conversation are engraved on the canvas in the form of fluent cursive calligraphy. These calligraphies are intertwined with layers of images, and vivid expressionistic abstractions that bring these images to life. These dreamy lands, traversed with the artist’s involuntary calligram, visualize the edicts of the mediums, depicting the stages of healing and exploration through pictorial, non-pictorial, semantic, and non-semantic motifs. The healing path itself is made up of sudden intuitions, moments of absolute light, stillness, listening to oneself, and even unexpected obstacles. As the artist explains, “Discovering the depths of our interior life is like entering a dense forest that has few clear paths and many occasional dangers, but the adventure to get to know oneself is exciting as the discovery of our subconscious. There are real treasures of wisdom, intuition, and enlightenment that we can visualize in our dreams every night, but we can also reach them by our exploratory immersion in art.”

When we feel confused in meaningless inanity, traces of inner movements, calligraphic images, and directional vectors are signs and symbols that can represent our way out, a healing path we can follow. These movements, images, and vectors are the result of the free coexistence of ideas realized by a hand gesture, a movement that manifests itself in the stroke of the pen, reconciling time with movement, and life with art.

In these paintings, the tension between the super-encoded realm of semantics and the analogical realm of unconscious – that produces automatic writing expressing mysticism, emotions, fusion of perceptions, and dream language – reach the blast. The phrases that the artist underlines appear now as mental maps, in which the constant flow of the patient’s words intersects with the therapist’s scientific system. These maps capture something beyond conversation and show the wide-ranging difference in logic between the words of conversation and their interpretation through the imaginary alphabets used by artists.

The relationship between this invented language and non-linear thinking displays the psychological labyrinth of contemporary man and creates a vague coexistence between an attempt to say and direct speech, and between potential semantics, and self-meaning. Although, from a medical point of view and the artist’s own idea about her paintings that is “everything is written and drawn on the canvas”, from an artistic point of view, the most intriguing aspect is the lack of precise boundary or limits of the expressive and communicative potential of the non-semantic calligrams by which the scientific evidence is interpreted. Thus, the issue of semiotics and writing in art is re-emphasized as Barthes argued that avant-garde writing should maintain the perspective and potential concept rather than the concept itself and that calligraphy is a very interesting tool for the explicit expression of the implicit aspects of language.

In the background of Paola Santagostino ‘s paintings, we find cells, the physical basis of our organic life, and neurons that intertwine their dendrites and create synapses, all this to indicate that our physiological processes are “invisible” to our consciousness but at the same time they keep us alive and allow us to think. Mental processes arise from our subconscious, just like the seeds take root in the depths of the ground before reaching the light. If we assume that our self-consciousness fluctuates between moments of complete consciousness and instinctive and involuntary reactions and that 96% of the universe itself is composed of invisible dark matter and energy, then the relationship between individuality and language, between appearance and meaning, can be equally immeasurable. An aspect that limits and artificializes any attempt at simplification in the decoding of symbols and semiotics. 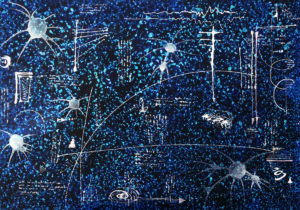 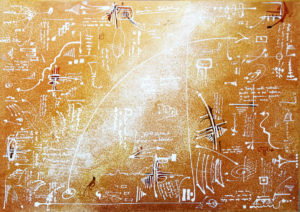 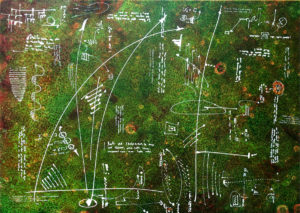 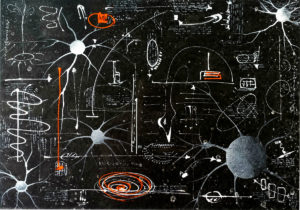 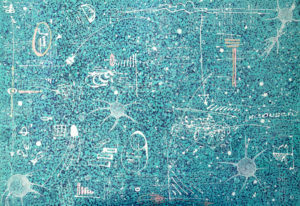 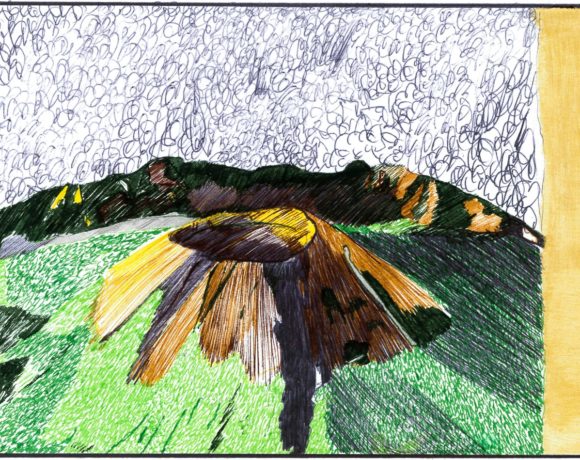