The performance at Connexxion: more alive than eve...

If we were to think about the fate of humanity in terms of spaces, the city would be the place where our lives are enclosed: a dynamic framework, which cradles us, ready to gather the nourishment of our emotions. Yet in the metropolises that we are so certain to know, there are places that are still waiting to be discovered. This thought is described clearly by the poet Sandro Penna, who states «it was my city, the empty city at dawn, full of my longing. But my love song, my truest song was to others an unknown song» (Sandro Penna, Poesie scelte e raccolte dall’Autore nel 1973, Oscar Moderni, 2022, p. 95). Such a deep and subtle interpretative thought is revealed on the occasion of the widespread art festival entitled Connexxion, curated by Livia Savorelli, which is organized in different parts of the city of Savona. The artists Andrea Bianconi, Eleonora Chiesa, Vanni Cuoghi, Giovanni Gaggia, Loredana Galante, L’orma, Ilaria Margutti, Camilla Marinoni, Vincenzo Marsiglia, Alice Padovani, Francesca Romana Pinzari and Mona Lisa Tina worked as skilled search engines and, Although all engaged in using different media, they have devised a varied circle of activities enveloping and impossible to perimeter in a single expressive language. The festival would not have been possible without the vivid and energetic curatorial activity of Savorelli who, without setting any pre-established limits, was able to break the lines of ideological demarcation, often tending to the virtual subdivision of exhibition genres. In this way, the curator created the conditions for the audience to hear an unusual love song not only towards the host city, of which some neglected visual geographies have been highlighted, but also towards the poetic vein of the artists involved. With Connexxion art has lost its innocence, freely trespassing beyond the sterile acts of performance and installation. The result was a bold and pleasant mixture impregnated with experimentation and nonconformism, able to remind us that if you live the city according to that love song, then you will never be more alive. 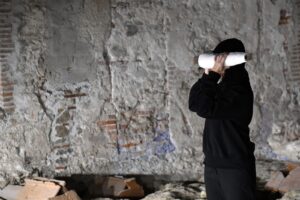 The exhibition is particularly attractive for the intelligent selection aimed at performance, which is well structured for the multiple and complex linguistic shots, and also because united by various actions that understand the performative act as an opening towards themselves, to the point of stimulating intense emotional fibrillations that leave visceral traces. Wonderful and strongly energetic is the unpublished performance of Mona Lisa Tina, based on corporeity, which is experienced in a vigorous relationship with the entire audience present, involved in an exchange of hugs between the performer and the viewer, moments accompanied by the whisper of a different phrase for each participant. What is whispered originates from the moment of strong psychicity that occurs in the dual meeting, dedicated and almost personal. In this way Mona Lisa Tina, besides being a poetic figure, imbued with a calm and balanced energy, represents a contemporary priestess, who lets herself be transitively invested by the temper of the audience. Confirming this hypothesis is the evocative place where the performance took place: the Chapel of the former San Paolo Hospital in Savona, transformed into an extremely dynamic ritualized visual picture, with a path of shattered glass and a light installation at the top of the altar. Being spiritually transparent in the eyes of the artist is what happens with Mona Lisa Tina, so what emerges from her words is a fluid corporal pact with the public as flesh, unconscious thought finally manifest. 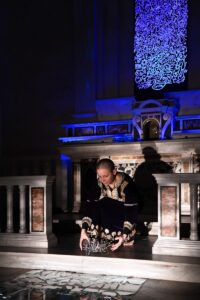 Although the work of Giovanni Gaggia fits into the installation context and not performative, it is clearly understood how much is generated by a mental action, so as to conceive in situ a phonic catharsis striking for its aspect of formal minimalism. The creation, entitled Niente sarà più come prima, is a successful montage with penetrating features both for the place, the Sistine Chapel adjacent to the Cathedral of Savona, both to be the summary of a workshop made with the representation of Ukrainian women hosted at the Diocesan Foundation of the same city.  The blankets, asymmetrically resting on the benches, skim all kinds of rhetoric and make the space inviting and habitable, in a historical situation dramatically unstable as the current one. And here is that the golden thread that serves as an embroidery to the blanket placed under the altar and the presence of a background audio stand against the deaf and anesthetic world that desensitizes the human being in everyday life. The result is that the power of the whole work lies, without any doubt, in the absence of marginality, and the lacerations of the quilt appear as a symptom of a vulnerable historical and collective time, whose feeble voices, collected in a background audio, do not remain at all strangers. Gaggia’s strength, in other words, resides in dealing with collective issues with a rare virginity of mind, well nourished by a depth of passion that is placed against introspection and skillfully deployed with sound and visual codes. 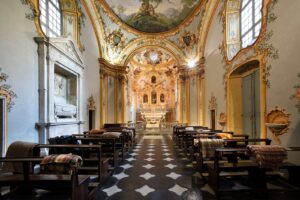 Unlike what proposed by Pinzari, Marinoni and Padovani is strongly maintained by a common research on the body as an envelope soaked with extreme fragility and carrier of wounds. Francesca Romana Pinzari, with Ti amo troppo, revolves around the idea of the present as a trick useful to establish a connection with the public: the action, in fact, consists in the gift of a box from the artist to the public, likely to be understood as a call for help. What attracts is the reification of the gesture that sensitively touches the nerve of the viewer continuously stimulated by listening to a sentence, thus generating a vibrant tension between the desire and the expectation of receiving that small gift, which is nothing more than a barbed wire, in which a sentence intended to stimulate a thought is placed. 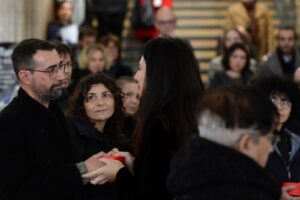 In Camilla Marinoni the body of the performer is a composite architecture inside the remains of the Archaeological Museum of Savona. The action is removed from any narrative connotation to take on a symbolic function in which ceramic fragments become concave prostheses that welcome the depths of the body. Among the craters of the archaeological remains, Marinoni collides with herself, continuing in a navigation of the collective unconscious that follows her actions in seraphic silence. The action of Alice Padovani, accompanied by a sound design by Le Piccole Morti, is presented with a physical intensity that does not console the viewer at all, but rather stuns him. The performer, whose back is covered with thorns, intimidates the bystander by the inhuman aspect, while the slow and rhythmic movements that want to free her from the thin veil seem to want to unlock the productive forces of the unconscious, so as to bring out a traumatic perception of your physique. 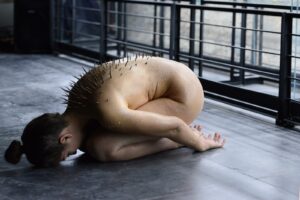 Finally, it should be stressed that all the activities described above underline the ability to draw a pluralistic itinerary, while always characterized by an extraordinary consistency, a characteristic from which emerges, clear and throbbing, the vocation of every artist to know how to live the tumult of life in a melancholy ardor, a pulsating restlessness, impressions that only a true and convinced performance can give.