Placing ourselves in time and .. 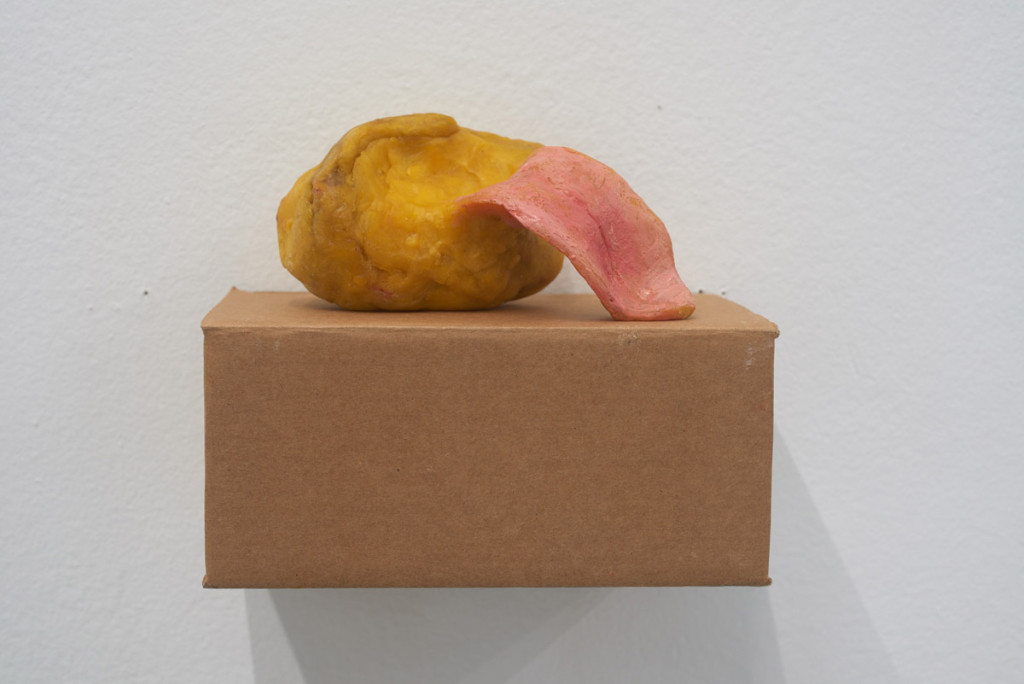 The irreverent artistic duo Vedovamazzei, born in 1991 from the meeting between Simeone Crispino (1962) and Stella Scala (1964), a couple of Neapolitan artists who moved to Milan, is impossible to frame in a theme, in a formal vein or in a single working method. Their corpus of more than 900 works derives from the use of the most disparate media, such as video, environmental installation, object sculpture, photography, in addition to the more traditional painting, watercolor and design, whose heterogeneity converges in the objective to look beyond appearances to manifest the occult symbolic potential of apparently trivial objects and situations. Disenchanted and astute observers of the contradictions inherent in private and global everyday life, with their creative practice, they discuss the formal and intellectual presuppositions of art and reveal the historical and political ambiguity of the contemporary by rejecting with the same decision the trick of the gimmick and a impossible formal integrity. Making use of an unsettling and sometimes perverse approach, the two artists create complex visual systems that ensnare the viewer in a sophisticated system of perceptive, mental and emotional traps that snap off exactly when the message seems to be lighter and more reassuring.

In constant balance between dream and disenchantment, they hybridize a refined artistic culture with grafts of trivial reality to demystify the apparent order of things and grasp the senselessness on which some of our most deeply rooted conventions are based.  Stuffing paradoxes that reveal the hidden reasons of habits and facts taken from the news  while they pretend to conceal their unbecoming implications, they use irony in the classical sense, as a foreboding of a catastrophe unintentionally announced by an unconscious protagonist. The core of their work are universal themes, such as death, violence, war, the overwhelm inherent in power or the emptiness of self-referential art, which are revealed in fortuitous encounters and deliberately mediocre circumstances whose absurdity is always tragically overcome by the absence of meaning of real events from which they take inspiration. Being out of place and out of proportion is a striking way for artists to claim a freedom too often entangled in minor contingencies and the necessary prerequisite to break down the contemplative detachment with which the viewer defends himself from uncomfortable works or truths and affect his imaginary with a sharp humor.

For the exhibition Unexpected landscapes at the De’ Foscherari gallery, Vedovamazzei imagines an alienating visual landscape made of dubious signals and imperceptible clues in which the initial wonder of the gaze soon generates the suspicion of a plot contrived to obscure the comprehensibility of what appears. Beyond the immediate effect, what is required is a further effort of attention and identification with the possibility of misunderstanding of the work, thanks to which its internal narrative begins to unravel, bringing out the problems raised by its presence.

At the entrance of the gallery the spectator is welcomed by the sculpture Two half pallets (2016/2017), a pair of pallets which are identical in shape and size but distinguished by a different shade of brown; chipped and worn, they appear slightly modified by the artists who have removed some superficial portions of material to relocate them on the top of the structure positioned in equilibrium on one of the long sides. In reality, one of the two is the real object made of wood, a living material destined to change and to crumble over time, while the other is a bronze copy that immortalizes the appearance of the model at the precise moment in which it was realized. The sculpture is an eloquent metaphor on the illusory authenticity of the works of art in history and summarizes the transmission mechanisms of the original artifacts through conservation actions that artificially maintain their appearance or through reproductions that perpetuate a form emptied of its intrinsic material vitality.

The pictorial installation Floating human shit searching for the perfect storm in the Mediterranean Sea (2017) offers a deceptively harmless gallery of marine landscapes created in amateur style. Even here, looking better, the amenity of the vision is contradicted by a perturbing element that recurs in every image: an iconic human excrement floating on the surface of the water in silent symbiosis with the cloying landscapes in which it is immersed. The immediate reference here is to the sinking of the boats of migrants and to the moment when the calm sea returns the bodies and the natural excretions of their fear; removing the virulence of direct experience from the tragic, the artists succeed in elevating it above a hypocritically comfortable zone to transform it into a shared warning and condition.

In (2016/2017) it is still painting that renegotiates the complex relationship between reality, appearance and falsification: a large canvas shows a charming countryside in the middle of which a half-hidden white building can be glimpsed, which is the home-bunker of the Saudi terrorist, as indicated in the title. The work is ideally linked to a series of small-format paintings depicting houses of famous dictators or buildings that were the scene of bloody events in recent history, such as the Casa Rosada, seat of the executive power of the Argentine Republic in which it had been decided the fate of the desaparecidos. In addition to reflecting on the potential of contemporary painting to interpret, re-read and testify its own time, the works provocatively challenges academic techniques, iconographic models and aesthetic canons with an ostentatious imitation of the ungrammatical peculiarities of street painters.

A radical political and critical message also characterizes United Nothing (205/2016), an exhibition composed by a crossing of tiled walls on which appears the inscription that titled the work. The work reproduces in an indelible way (the letters are fused in majolica and not simply traced with a pen as it seems at first sight) the wordplay written by a soldier on the wall of a public bath in a war zone to give vent to his own inner rebellion to the reasons for the mission in which he was engaged on behalf of the United Nations. In ironic dialogue with the sculptural revival made of beeswax of Mick Jagger’s tongue that became the famous logo of the Rolling Stones, the installation affects symbologies and false myths spread by the mass media to spur us to be wary of the obvious and ask ourselves what it is swarming under the skin of things. 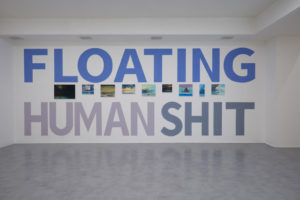 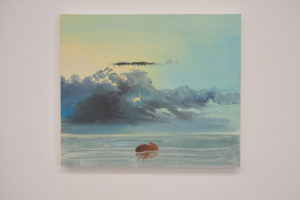 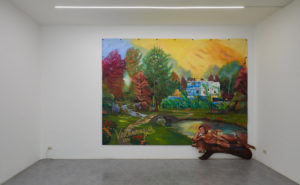 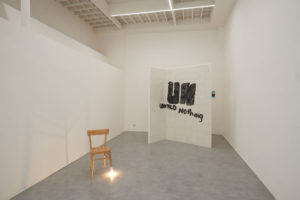 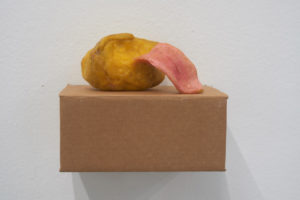