Yayoi Kusama: Eline Retrospektive. The story of an...

Yayoi Kusama: Eline Retrospektive. The story of an intimate obsession

After postponing it for more than a year, on 23rd April 2021, the Berlin Gropius Bau Museum opened the first retrospective in Germany dedicated to the Japanese artist Yayoi Kusama. The exhibition, organized in collaboration with the Tel Aviv Museum of Art and the artist’s studio, offers an accurate reconstruction of Kusama’s artistic poetics, from her first works in the 50s to the most recent ones. For the occasion, a site- specific environmental installation and an unprecedented Infinity Mirror Room will be presented to the public.

Yayoi Kusama, born in 1929, is one of the most famous artists of the New York avant-garde of the 60s, known by international critics thanks to her revolutionary “psychosomatic art”. Affected by neurosis since her childhood, Kusama seeks within art an escape, a cure, which leads her to pour out the whirlwind of auditory and visual hallucinations that afflict her mind. Through the endless repetitions of dots nets, pumpkins, and phallic protuberances, Kusama expresses her deepest fears and obsessions: “a work of art is an expression of my life, in particular of my mental illness”. Through a multitude of languages, ranging from painting, to sculpture, to performances, the artist creates her own personal universe with which she faces the social difficulties of contemporary America: the problems of identity linked to the sexual revolution, racial inequality, and social classes injustices.

The long-awaited curatorial project, as explained by the director of the contemporary museum Stephanie Rosenthal, focuses on a faithful restating intervention, a careful selection, and “restating” of eight of Kusama’s most important exhibitions. “Reconstructing these groundbreaking exhibitions, which Kusama designed down to the smallest detail,” the retrospective tackles the artist’s presentation in Germany and Europe with the aim of “underlining the important role she plays in an international network of artists, critics, curators, and galleries”. The program follows a chronological timeline that spans almost over seventy years: from the first native land exhibitions in the 50s, to the successes of the New York season, and European award in the 60s, up to the return to Japan in 1983.

The exhibition opens with the first Japanese show of 1952, the “Solo Exhibition” and “Yayoi Kusama Recent Works”, for which Kusama, back then only twenty-three, creates the first monochrome canvases, varying from watercolor to gouache to oil. The artist painted, “relentlessly”, as she remembers herself, a profile of dotted nets that spread like cobwebs over the entire surface of the picture. These are then followed by the revolutionary overseas exhibitions held during the hectic New York season, where Kusama’s art took on a material form: “the unlimited progress of this obsessive art was the change of my artistic skin from painter to environmental sculptress”. For this new phase, called “Soft Sculpture”, the retrospective reconstructs the famous solo exhibition “Aggregation: One Thousand Boats Show”, organized in 1963. The artist had placed a soft boat-shaped sculpture in the center of the room covered by an unknown number of protuberances padded with phallic shape and covered with white fabric. Through the male reproductive organ, Kusama projects her sexual fears caused by her rigid education given to her in her youth: “those faults were a form of self-medication. What I call psychosomatic art”. In the following exhibition, “Driving Image Show” held in 1964, the artist gives vent to another obsession related to food covering: chairs, tables, shoes and phallic objects with industrial paste.

The retrospective then continues with the “Infinity Mirror Room” series, in which Kusama once again evolves her artistic research by dedicating herself to the creation of a new three-dimensional, more spatial dimension. Through the use of the mirror, the artist builds a new dimension by disintegrating the subjectivity of those who are reflected in it thanks to the shattering of the image in its infinite repetition. For “Infinity Mirror Room-Phalli’s Field” in 1965, Kusama had placed mirrors on the walls of the hall, while on the floor she had placed hundreds of white fouls with red polka dots. For the “Endless love Show” in 1966, Kusama created a hexagonal room with mirrored walls, without sculptures or paintings, completely empty. Working with electrical materials, she created a single large multimedia installation, where she scattered on the ceiling, like constellations, a multitude of flashing coloring bulbs.

One of the latest reconstructions focuses on the “Driving Image Show” exhibition organized in Essen, Germany in 1966, which consecrated the artist’s presence in Europe. Compared to the sister exhibition in New York, in the German one the accumulations are accompanied by objects covered with gold. Finally, “Encounter of Soul” 1983 is re-proposed, hosted in Tokyo, where the artist’s most significant works were brought together. During the entire journey, the viewer is accompanied by photographs and documentary films that illustrate the performative activity of the artist who gave her the name of “Kusama naked painter”.

At a time when the social desire to escape from the constraints imposed by the health crisis is becoming ever more heated, the Berlin Museum offers with this exhibition an escape from everyday reality. Thanks to her alienating dimension, far from the alienating routine of every day and her ability to express fears and anxieties, Yayoi Kusama once again becomes the face of individual freedom. 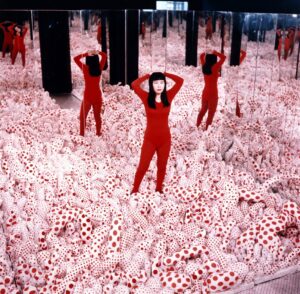 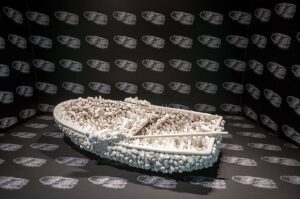 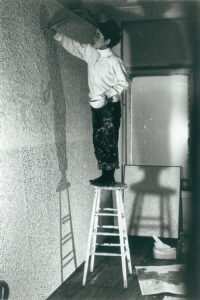