In the warp and weft, a meetin..

Yto Barrada, was born in Paris in 1971 in a family of Moroccan origins, and is recognized for her multidisciplinary investigations focused on cultural phenomena and historical narratives, so much so that she does not have to consider the label of “committed artist” as inappropriate. By means of performances and archival investigations, Barrada’s installations reinterpret social relations, reveal subaltern stories and show us how in institutionalized narratives (always the sack of conquerors or victors) it is never the truth that prevails, but always the elducorazione if not falsehood. In 2006 Barrada founded the Cinémathèque de Tanger, with the aim of making local and international cinema known in a reciprocal manner and with equal dignity. On an institutional level, Barrada’s work has been exhibited at the Tate Modern, MoMA, the Met, the Renaissance Society, the Walker Art Center, the Whitechapel Gallery and the Venice Biennale, in 2007 and 2011. The author has also received numerous awards, including, in 2019, the Roy R. Neuberger Award.

From January 29 to March 17, Yto Barrada exhibits at Goodman Gallery, in Johannesburg; the exhibition is called She Could Talk a Flood Tide Down. This is the artist’s first presence in Johannesburg and her first ever collaboration with this gallery. The exhibition in Johannesburg coincides with the solo show that the author has in progress at the Massachusetts Museum of Contemporary Art, Ways to Baffle the Wind.

Within the exhibition She Could Talk a Flood Tide Down, the narrative develops by retracing stages of memory: we find a reflection on water and land reshaped by water, with islands and cities that sink or risk disappearing. It is a social and historical problem at the same time: just think of the so-called high water problem in Venice or the Kiribati islands (in the Pacific Ocean), which are destined to be submerged over the next sixty years, for understand the seriousness of the problem. Everything is analyzed through the participation of a community of children called to build an ideal world. The starting point for this involvement comes from the essay by architect Simon Nicholson, “How NOT to Cheat Children: The Theory of Loose Parts” (1971). In that text, also referable to Riccardo Dalisi’s architectural and animation projects, was formulated the theory according to which the richness of an environment depends on the opportunity with which it leaves room for people to interact and make connections. In this sense, the unbridled imagination and creativity of children are stimulated through the search for natural or unstructured materials. In this way, play and learning become an inseparable knot, according to the teaching practice of the pedagogist Maria Montessori who, even in the last century, had placed respect for spontaneity and interaction at the center of the educational system.

For example, Land and Water Forms is a series of paintings inspired by Montessori school practices, used to teach children about geography through visual inversion. In her works, the forms of the soil are coupled and transposed (island / lake, archipelago / lake system, isthmus / channel), drawing attention to the interconnections between the physical structures and the substances of the earth. Through flashes of humor, works such as Mnemonic Phrases (2019) explore mnemonic devices beyond their linguistic function, placing them within the rhythm of the story in which the found phrases, just like the found objects, perform on their own. For this reason, fragments of materials manage to interact with each other as well as self-produced tools that can inspire new techniques, as well as cardboard cutouts of collages (in Grinding Teeth, 2020) are often used as brushes to make other paintings, suggesting the possible synchronicity between the means employed and the legitimacy of the creative exchange.

Highlights in Barrada’s practice are the concepts of pleasure, discovery and analysis, which are formulated through key works that experiment with unusual materials (such as rust, cotton, natural dyes) together with traditional processes. Using visual, textual and sculptural “relics”, the exhibition finds anchor points in the historical narrative and in the aesthetic imagination, but in parallel condenses and lengthens the frame of time in which everything is compressed and reworked, to symbolically represent something of other: a dreamed or longed-for world, a hope or a simple awareness. 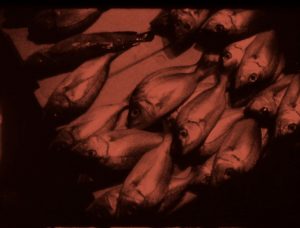 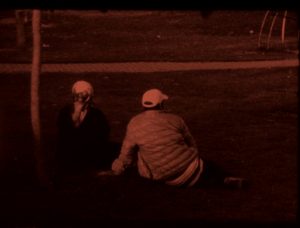 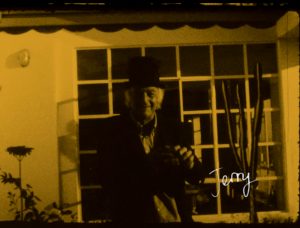