The Contemporary Grand Tour by..

Erika Lacava: In your personal experience, the places where you produced have be decisive for your works of art?
Adrian Paci: I began my experience as an artist through painting, a technique that rests on an easel and which is therefore linked to a fixed place, often closed. In Scutari I worked in the studio of my father, a painter who passed away when I was only six years old. It is in Milan that I started working with other media, videos, photography and installations. The place of production of the work has diversified and the study from that moment can be anywhere for me. Study is not just a static place where I can isolate myself from the world, and as such it is less decisive for my work. My work today was born in the context and in specific encounters. Places become part of my work in the way spaces, people and situations are often the necessary condition of the work.

E.L .: Since you arrived in Milan, how many studies have you changed and how have you dealt with them?
A.P .: I arrived in Milan in 1992 with a scholarship from the Beato Angelico Institute where I attended a post-graduate course. At that time my study was the one inside the school. When I returned to Milan in ’97, my primary need was the living space, which I also used as a place for paint. Then I started working on the video. In the studio there is a close dialogue with the canvas, the support, but when I changed my type of works, the meeting from which the work was born became important. It is always an unexpected encounter. Work lives in this tension, in this non-determination of the place. A greater fluidity has entered my work between the time of life and the time of work, which has also determined the choice of places. The dimension of the studio has become more nomadic in keeping with my needs. For example, even though I lived in Milan, I often returned to work in Albania, or in England or in the United States. On the contrary, in 2007 I had the need to have a space to prepare large paintings for an exhibition at the Peter Blum gallery in New York. So I found a large space, halfway between the farmhouse and the garage, in Stezzano, near Bergamo. Together with my former student and friend, Giovanni De Lazzari, we practiced the daily habit of painting, a very pleasant practice between work, eating and drinking, discussing together, listening to music, poetry and watching movies. Together with Giovanni and Emma Ciceri, another former student, today an artist, I have kept this studio for years, which has also become the setting for a Via Crucis, now exhibited in the church of San Bartolomeo in Milan. Over time it has become difficult to manage the distance between home and study; so since last year I took a studio in the Lambrate area that I share with a very good painter, Iva Lulashi.

E.L .: Video-artist, photographer, painter, sculptor. What is there in Adrian Paci’s studio today?
A.P .: For me, the studio has remained a place dedicated to painting. I make the videos elsewhere, often in collaboration with specialized studios. What’s in my studio? Books, sofas, chairs, paintings, colors. An archive and a warehouse. My studio has a modest size, which also belongs to me in work. I don’t really like monumentality, appearance and spectacle. I don’t need a huge space in which to settle down and receive inspiration because inspiration can come from everything: from the encounters, from the movies, from the images that I see from my phone, from the life that surrounds me. I do not have the aptitude of the studio as a place for the mystical retreat of the artist and I do not even see it as a representative showroom. For me it is a workplace, necessary and limited, unlike, for example, the place of sharing which is instead the Art House in Albania, where the architectural project also coincides with the use of space.

E.L.: Recently you created a format for the Pini Foundation to host a virtual exhibition of young artists on social networks. Working with young artists is one of your constants, starting with the Art House School residence. How do you live this relationship?
A.P.: For me, the relationship with young artists is physiological. It is a relationship that requires commitment and generosity, but at the same time it gives me a lot back, it feeds me. It is not about teaching in the strict sense, even if in Italy I play an official role as a teacher. With the term education I mean a process that must not fill an empty container: education tries to discover and stimulate the student’s potential and not to affirm authority, it is a love relationship, not only between student and teacher, but above all towards that third element between them, which is knowledge itself. In Scutari we have recently organized a translation program of theoretical texts by international thinkers to be made available in Albanian because knowledge cannot be a property, it must be circulated. Knowledge must be accepted and also questioned. The Art House School is founded on the same principle: there are no students and professors, but an exchange between artists, between those who have more and those who have less experience, or a different experience. Young and old feed on each other and question each other.

E.L .: From host to host. How do you live your participation in residences?
A.P .: You don’t go to the residences to confirm and celebrate the place itself, but because inside that space you found something else. What matters is not the affirmation of the place or history or specific face or body, but the discovery of the otherness that these have. As for the enclosure surrounded by trees of the video “Inside the circle” made in the Rave-East Village residence of Tiziana and Isabella Pers: for me it was no longer simply Friuli, it was not a specific place to describe, but it had become something else. I immediately saw it transfigured in a primordial place, a kind of garden of Eden. The places, as well as the stories, together with their contingency are carrier of other: their potential must be enhanced to become elsewhere.

Adrian Paci (born in Scutari, Albania, in 1969) studied painting in the Academy of Fine Arts in Tirana. In 1997 he moved to Milan where he lives and works. During his artistic career he had personal exhibitions in various international institutions such as Kunsthalle Krems (2019); MAC, Musée d’Art Contemporain de Montréal (2014); PAC, Milan (2014); Jeu de Paume, Paris (2013); Kunsthaus Zurich (2010); MoMA PS1, New York (2006) and Contemporary Arts Museum, Houston (2005). Among the various group exhibitions, Adrian Paci’s works were exhibited in the 14th Architecture Biennale – La Biennale di Venezia (2014); in the 48th and 51st edition of the International Exhibition – La Biennale di Venezia (in 1999 and 2005 respectively); in the 15th Sydney Biennial (2006); in the 15th Rome Quadrennial, where he won the first prize (2008). Adrian Paci is teacher of painting and visual arts at New Academy of Fine Arts, NABA, Milan. He taught art at Carrara Academy of Fine Arts, Bergamo (2002-2006) and at IUAV in Venice (2003-2015) and held art lessons and workshops in various universities, academies and international artistic institutions. 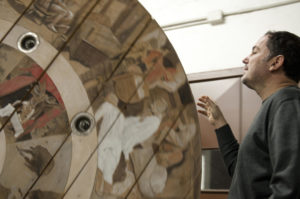 Adrian Paci in his studio 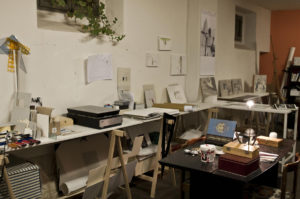 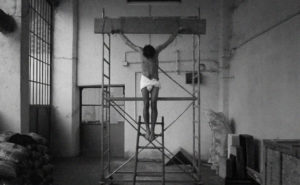 Adrian Paci works on Via Crucis in his studio in Stezzano 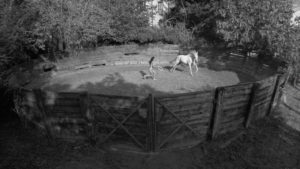 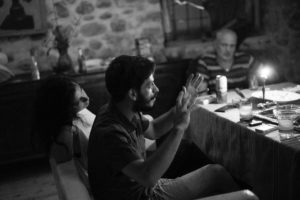 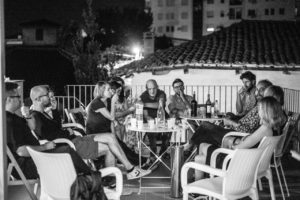