Never as in this period the concepts of care, well-being and psychophysical health have been so widely incorporated into our existential and social dimension as to perhaps irreversibly condition our approach to the world, now perceived as dangerous and uncontrollable otherness from which it is necessary to defend ourselves. The impression is that the most rigid therapeutic strategies, often declined in precise protocols in which the ideological, economic and political component seems to prevail over the real monitoring of the singularities that make each individual unique, are implemented more as superstitious mantras than as targeted paths of support and care. The overcoming of the problems is thus brought back to an impersonal conformity to standard parameters which, initially elaborated as a unit of measurement and orientation, tend to lose their original instrumental function to assume the value of objectives tout court, generating a dangerous short circuit in which business logic ends up consolidating insidious removal mechanisms.

Your own good, personal exhibition by Cathleen Owens (1992, United States), artist and communication consultant, reconnects to these themes in the two rooms dedicated to the temporary exhibitions of TIST – This Is So Temporary, artist-run space inaugurated at the beginning of February 2021 with the artistic direction of the curator Yulia Tikhomirova and the artist Michele Liparesi in Rastignano near Bologna. The space, located in an area characterized by the presence of other sheds used as studios by local artists, is conceived as a multimedia laboratory of contemporaneity by hosting artistic residences and exhibition events in which research on visual languages ​​translates into the proposal of “experiences” in which the public is called to practice transversal forms of knowledge, at the crossroads between contemporary art and social life. Cathleen Owens’ exhibition is also configured as a performative installation, where the visitor is welcomed in the apparently aseptic antechamber of what could be a wellness center or a medical office, furnished with the most classic armchairs (comfortable but rigid) that usually we can find in the waiting rooms and with posters that illustrate the guidelines of the treatments that will presumably be proposed in the actual studio, which we can glimpse through a door designed to remain artificially ajar.

At first glance, nothing strange, but we recommend that you take your time and behave as if you were really waiting your turn for the appointment with the therapist that we suppose you should meet in the adjoining room. We look around a little nervously, also because all the elements that we had at first perhaps absent-mindedly considered normal, if observed more carefully, begin to take on a disturbing connotation. We understand that the kinds of comfort made available to the patient are actually of no use: the magazines with which we should fool the wait are dated and worn, the water dispenser is empty and without glasses and the posters on the walls, on which stands the company logo Your untapped potential (the most canonical of the clichés associated with care understood as an implementation of the self), hide contradictory messages that make the obvious collide with doubt and nonsense. Even the video transmitted in loop from the screen placed in a corner of the room, with the writing too small and the audio too low to be enjoyed by the armchairs, transmits ambiguous advice for well-being and personal growth, which start from the stimulus to create multiple flows of income by renting a free room in the house or opening a street food business in the garage to get to suggesting to create not better defined intellectual products to condition other’s minds and (even) to outsource the liver.

We then enter the actual studio and the subtle perception of incongruity that began to worry us during the wait is confirmed and amplified in an explosion of bewilderment when we discover that the treatment laboratory is a dystopian and dilapidated environment, where office furniture has exploded, on whose surfaces sticky notes are piled, on which we read discounted assertions that recall the stereotypes of corporate training and the most superficial recommendations of hasty psychology. These clichés, incontrovertible in their banality, appear completely devoid of meaning due to their disordered overlapping in the impossibility of finding a common thread that can relate them to a path of care and appear as material extensions of the professional who bases his/her activity on them. Also the therapist-guru (personified by the artist in her Instagram performances) is physically absent and her equivocal existence is attested only by her self-referential soliloquies that are transmitted on video from some smartphones abandoned around, whose coexistence generates an indistinct and Babelic whispering. We explore every nook and cranny of objects and words with growing spite, but our repeated attempts frustrate the search for understanding and the need for meaning, until we understand that precisely the uncomfortable intuition of the constitutive contradiction of the microcosm engineered by the artist (so similar to what we might encounter in real life) and the distrust that derives from it are the real therapy that Cathleen Owens offers to her patients by implementing a highly calibrated semantic intersection of linguistic devices drawn from different persuasive spheres of contemporary culture. 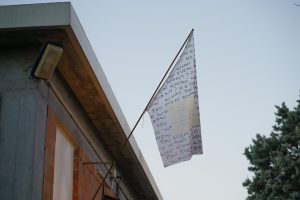 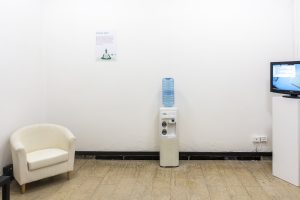 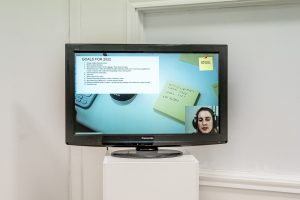 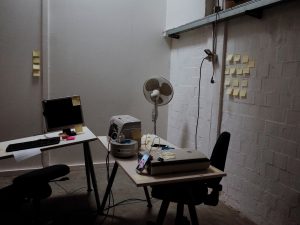 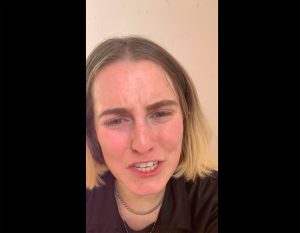